Today I learned why Ireland is so green. While the first part of the day was surprisingly sunny, it has rained non-stop since around 1 this afternoon.

Kourtney and I woke up at 6 am today, got ready, and left our hostel at 7am to catch a street car to bring us to Heuston Station. I activated my Eurorail pass and we were off to Cork. Once we were on the train we both fell back asleep for a few hours. Our first stop was Blarney Castle, where we walked the grounds through the gardens, climbed through caves, and eventually got into line to go into the castle. We had to wait about half an hour outside, and then another half hour climbing the stairs and exploring the rooms inside the castle before making it to the top and kissing the Blarney stone. First off, whoever started this tradition is strange. Why you have to bend over backwards, 5 stories in the air, to kiss a rock is beyond me. But it's one of those things you can't skip out on when in Ireland.

I really sad part of the day happened on the climb back down the castle steps. An elderly man in front of us took a spill in the spiral staircase. There were pools of blood everywhere, dripping down the steps, and he had a large cut across the top of his head. Luckily his whole family was with him to help, but he had to be taken away in an Ambulance.

Then the rain started. We got back into town just in time to find a pub for lunch when it start to rain. And then it turned from light rain, into a straight downpour. And then it just kept coming down...

We waited in the pub until just before the bus came, trying to avoid getting soaked, then made our way back to Cork. Because it was raining, we did some shopping in downtown, but declined to wander far from cover. Eventually we walked our way through town and back to the train station were we caught the 4:20pm train back to Dublin.

Once we got back, we were planning to meet up with a friend Rob from Singapore, but unfortunately he is in exams and couldn't make it. We planned to have a quiet night out, just going out for a few drinks close by, but this plan quickly changed. We went out to Temple Bar, and found a place with an amazing live singer, after 1 round of drinks we had made new friends: a German Soccer team in town for a tournament. They were singing drinking songs and having a great time. We made friends and somehow got onto their bar tab, and ended up staying out until the bar closed at 1. Rather than going home, we decided to all go out to a club which was open much later, and once again they grouped us in on their bar tab! We eventually closed down the club and wandered home around 4:15am.

It was an exhausting day.

I arrived at 9am to Dublin International, waited in a crazy long line at customs, got my passport stamped and then was ready to go. I caught a bus into downtown Dubin, and then walked to Abby Court- the hostel we are staying at all week. Kourtney wasn't arriving until around 2pm, so I found my bed and took a fantastic nap.

Once she got settled in, we hit the Temple Bar area of the city for some dinner and drinks while we caught up with each other. First we ate at Quay's, a small pub with flowers hanging from all the windows and Irish flags out front. Then after food and our first real Guinness, we moved on the The Temple Bar for some live music and a few more beers.

I goal was already completed for this trip, hearing the song from PS I Love You, Galway Girl, sung live at an Irish Pub just like the move! One day here, and we heard it twice.

We turned in early, and planned out the next several days in Ireland and Northern Ireland.

I just landed at JFK airport in New York, and am waiting for my next flight to Dublin, Ireland in 1 hour!!! I will be arriving at about 4am East Coast Time, and will have a full day ahead of me. Kourtney arrives a little after 2 in the afternoon, and I am very much looking forward to our reunion! 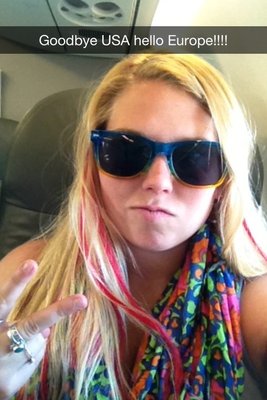